From Sunday August 1, WIN viewers across regional Australia can look forward to seeing 9Life on Channel 83.

What programs will be shown on 9Life?
There is an exciting range of shows on 9Life including:
• House Hunters
• Beachfront Bargain Hunt
• Masters of Flip
• Find Me a Dream Home Australia
• Barnwood Builders
• Maine Cabin Masters
• Building Off the Grid
• The Real Housewives of Beverly Hills
• Keeping Up with the Kardashians

What channels will I be able to receive from the 1st of August?

The WIN Network’s channels in Queensland, Southern NSW, Victoria and Tasmania will be as below: 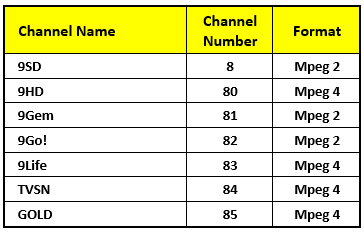 As 9Life will be airing on the existing channel 83, there should be no need to do a Rescan on your television or device, however some televisions may not automatically accept the new channel name 9LIfe.

If the Channel 83 name doesn’t say 9Life or if your television or device’s channels don’t match what is listed in the above table, a rescan may be necessary. Please consult your television’s User Manual on how to do a rescan. If you don’t have one, you may find a version online through an internet search.

Why won’t my television receive some channels?

If you are unable to receive and view some channels (like 9Life), it may be because you have an older television that does not receive the newer Mpeg 4 format channels.

For about 7 to 8 years, all television manufacturers have included Mpeg 2 and Mpeg 4 compatibility while at the same time, all new channels broadcast by Free to Air television networks have been in the Mpeg 4 format, rather than the older original Mpeg 2 format.

If you wish to receive these additional channels, you will need to either purchase a new television or a Set Top Box (cheaper option).

A Current Affair covers the realms of politics, crime, human rights, science, technology, celebrities and entertainment - all investigated by a dedicated team.

Wide World of Sports presents National Rugby League. Join our expert commentary team for all that action from kick-off to the final siren.